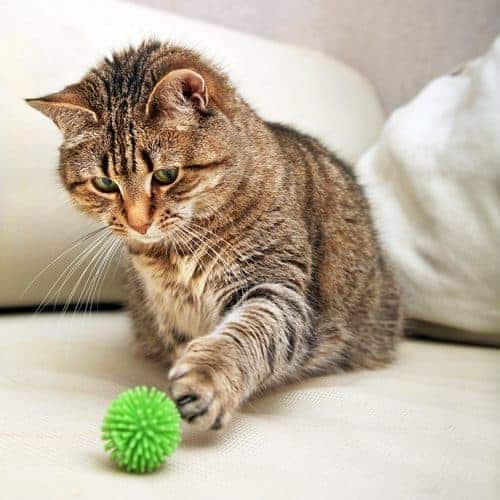 Is your cat a righty or a lefty? According to new research from Queen’s University Belfast, female cast are much more likely to use their right paws than males. Interestingly, this mirrors what's seen in people, with men more likely to be left-handed than women.

in the study, 24 male and 20 female cats, who were all neutered, were studied in their own homes, with researchers gathering information as they went about their everyday activities. Data was collected on whether the cats used their left or right paws first when they stepped down the stairs, over objects, or reached for food inside a feeding tower.

The majority of cats showed a paw preference when reaching for food (73%), stepping down (70%) and stepping over (66%) and their preference for right and left was consistent for the majority of the tasks. Notably, in all cases, male cats showed a significant preference for using their left paw, while females were more inclined to use their right paw. One Maine Coon cat in the study even liked to use his left paw to close doors on his owners!

Researcher Dr Deborah Wells believes this marked preference could be down to hormones: “The findings point more and more strongly to underlying differences in the neural architecture of male and female animals."

In addition, Dr Wells thinks that the findings could help cat owners to understand how their pet deals with stress. She adds: "Beyond mere curiosity, there may be value to knowing the motor preference of one's pet. There is some suggestion that limb preference might be a useful indicator of vulnerability to stress.

“Ambilateral animals with no preference for one side or the other, and those that are more inclined to left-limb dominance, for example, seem more flighty and susceptible to poor welfare than those who lean more heavily towards right limb use. We have just discovered that left-limbed dogs, for example, are more pessimistic in their outlook than right-limbed dogs. From a pet owner's perspective, it might be useful to know if an animal is left or right limb dominant, as it may help them gauge how vulnerable that individual is to stressful situations."

Which paw does your cat prefer?

According to Dr Wells, testing your own feline’s paw preference is easy, as long as you’re observant. So, grab a notebook, settle down in a comfy observation spot and start playing cat detective...

While some cats love to sit in a comfy lap for hours on end, others shy away from too much physical contact. Find out  Why Some Cats aren't Cuddly

Cats are the ultimate sunseekers – bagging themselves the sunniest spots for a snooze, even on a hot day. But have you ever wondered why Some Like it Hot