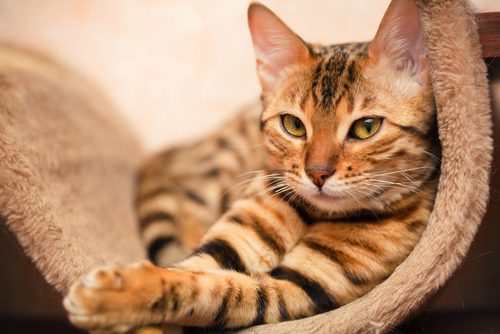 Cats have what is called a ‘righting reflex’, which enables them to twist around very quickly in the air when falling to provide them with a safe – and dignified – landing. Their flexible backbones also help them do this. However, most cats require a drop of one metre to give them enough time to right themselves. This ability doesn’t always keep them out of danger and pet charity Blue Cross warns of cats being at risk of falling from open windows and balconies, particularly in the summer. The charity recommends fitting mesh to windows and balconies to keep cats safe.

While it’s true that kittens must drink their mother’s milk or specially-formulated kitten milk provided by a vet, adult cats should not be given milk. This is because once weaned, cats become lactose intolerant and lose the ability to produce the enzyme needed to properly digest it.

Myth #3 Cats love to play with balls of wool

A kitten patting a ball of wool is a classic image – but a misleading one. Playing with a ball of yarn as it rolls and unravels is a dangerous game. Cats can easily become entangled, creating a potential strangulation risk, or tangle up a paw, causing injury. What’s more, swallowing wool can become a serious choking hazard and cause a blockage in the intestines, requiring emergency surgery.

It’s true that most pet cats are not big fans of water, probably because they are a creature that’s descended from desert animals. Scientists also suggest they’re not fans of getting soggy because their coats don’t dry very quickly, which can weigh them down and make them less agile. There are, however, some breeds that actively enjoy playing with water, most notably the Bengal, the Maine Coone, the Norwegian Forest Cat and the Turkish Van.

Cats are not nocturnal, they are crepuscular – which means they are most active at dawn and dusk. With their ability to see in low light (see myth #6), these are the best times of day for a cat to instinctively make the most of potential hunting opportunities.

Myth #6 Cats can see in the dark

Cats can’t see in the dark, but their eyes are much better than a human’s at seeing in low levels of light. The corneas in a cat’s eye are much thinner than in humans and their irises open far wider, both of which allows more light to enter. The retinas in the back of a cat’s eyes also have more rods, which are responsible for magnifying light impulses. Cats also have a highly developed reflective area in the back of their eyes, which is what makes them appear to glow at night when caught in the light.

Myth #7 Cats are not affectionate

Domestic cats are, by their nature, more independent than dogs – in part because they weren’t bred to spend a lot of time around humans, and also because their wild relatives don’t live naturally in the same sort of family groups that canines do. And while it’s true that cats do not show their emotions as overtly as some other species, they have more subtle ways of showing their affection – from cheek rubbing, to face bumping or just hanging around their favourite human. Cat behaviourist Marilyn Krieger says: “Cats are very good communicators, using a combination of body language, postures and vocalizations to express their feelings. Although cat affection is subtle and at times complex, they have a variety of ways of showing affection and trust to the people they are attached to.”

Myth #8 Cats only spray to mark their territory

Spraying is a normal feline behaviour that is generally about marking territory. However, cats also spray as a coping strategy during times of stress or when they’re ill. If your cat is spraying indoors they may be suffering from inflammation of the urinary tract, disorientation, or joint pain. All of those conditions could become serious if left untreated and you should seek advice from your vet.

By nature, cats are solitary hunters who are hardwired to defend their territory to ensure they are safe and can source enough food for themselves and their offspring, so it’s no surprise that most cats tend to prefer to be the only feline in a home. However, they can form friendships with their own kind – feral cats tend to live in colonies of related females. Siblings and cats that have lived together since kittenhood are likely to get along, although this may not always be the case, but introducing a new cat can be really tricky. In the cat world, good relationships hinge on there being plenty of resources available so that no one has to share or wait for anything. Pet charity Blue Cross recommends creating a harmonious multi-cat home by providing several feeding areas and litter trays, along with a range of places to drink, hide and sleep.

As capable hunters in their own right, cats have no overriding need to group together. However, despite their independent nature, cats can form firm friendships with other animals such as the family dog, as well as a very close bond with their human, coming to rely on their companionship. In fact, cats can get very stressed if they are left on their own for too long, which can lead to behavioural problems such as excessive grooming and constant meowing. Pet cats need regular playtime and plenty of human interaction – see myth #11.

Myth #11 Cats can entertain themselves

Sometimes aloof and always fiercely independent, felines still love to be entertained and thrive on playing lots of games and being given attention. Indoor cats especially need lots of time spent with their human companion to keep their body and mind fit and active. Find out more about how to play games with cats of all ages

While it’s true that cats often purr when they’re happily getting some fuss from their human, purring can mean something else. Cats can also purr when they’re frightened or feeling unwell or in pain as a way of comforting themselves. If your cat exhibits this behaviour, it’s vital to get them checked out by your vet.

Meowing is a behaviour cats have adopted just for humans. But what are they trying to tell us?

How cat friendly is your home?