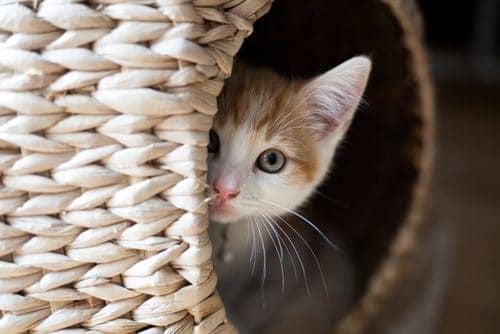 While cats have been the companions of people for centuries – the earliest evidence is a 9,500-year-old grave found in Cyprus where a human and cat were found buried together – as a species, they are not domesticated in the same way as dogs.

Even today, many millennia later, it remains the case that if kittens are not socialised with humans between the ages of two to eight weeks of age, they will become wild, feral cats, remaining fearful of people throughout their life. That’s why it’s so important to get the early socialisation process right.

The first two months of a kitten’s life is the most important period in which to expose them to all the things that we expect them to consider normal and safe when they grow up. Anything they don’t encounter within this brief time slot may be treated with fear and caution later on. This includes things they might see, hear and feel, as well as human interaction.

Finding out that people are OK

Touching, stroking and being handled by people are all things that kittens need to learn to enjoy as they aren’t things that they will naturally take to. Feline welfare charity International Cat Care recommends that, between the ages of two to seven weeks, kittens are touched all over, lifted frequently and gently restrained. This contact should feel positive for the kitten, so all handling should be gentle, sensitive and at a time when the kitten appears receptive.

The charity also advocates that kittens meet a number of different people to avoid acceptance of one or two individuals rather than tolerance of humans as a species. Human handling should occur for a total of 30 to 60 minutes a day, in multiple short sessions.

Research has shown that kittens that are handled by four or five different handlers (male, female, adults and children) before they are seven weeks of age will be more sociable to people as adult cats and more inclined to initiate social interaction with them. Cats that are only handled by one individual will be affectionate towards them but will view other humans with suspicion.

Learning to feel safe in a home environment

International Cat Care advises that it’s essential not to overload kittens with too many stimulating experiences and new objects at once. Introductions should be made gradually and gently at times when the kitten is active and responsive to ensure a more positive outcome.

Patience is required, but this all-important process in a young cat’s life is a real investment in their future and will make all the difference to how they see their world. All the effort will be worth it as this will help them grow into well-rounded, happy individuals who can confidently cope with the things they’ll encounter throughout their life.

How to train your kitten: That tiny bundle of fluff you’ve brought into your home is actually a mini-hunter, armed with teeth and claws and an in-built desire to stalk, chase and pounce, which is why it’s essential to teach your kitten to play nice…

How to handle your cat: An informative series of videos providing invaluable advice from the UK’s leading feline experts is a must-watch for every cat owner.

Proof that cats domesticated themselves: Scientists have uncovered evidence which reveals that cats decided having human friends was a good idea more than 5,000 years ago...