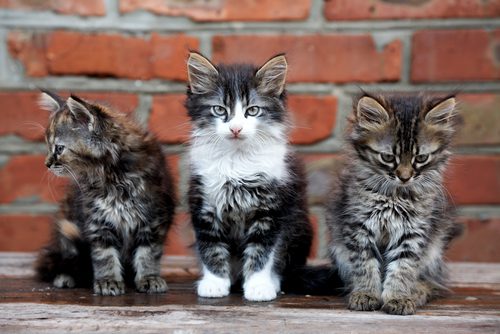 What personality type is your cat?

Are Ragdolls more sociable than British Shorthairs? Do Persians have a tendency to be aloof? Are Maine Coons more independent than Siamese?

Well, according to Dr Lauren Finka, Research Fellow at University of Lincoln and Feline Welfare Specialist for Battersea Dogs & Cats Home, a cat’s personality has nothing to do with its breed. Instead, it’s all down to a complex interaction between the genetics and temperament of the cat’s parents, their own DNA and their experiences during development and in adulthood.

What’s more, according her research project – The prediction of human-sociability in the domestic cat – which assessed 200 felines, there are five distinct personality types. Do any of them sound like your cat?

Happy to share our home, our lives and often our personal space. Domestic cats are not necessarily born with an affinity to humans but are nurtured into it with positive interaction, particularly in their ‘sensitive period’ which starts around two weeks of age. Shows a willingness to make your lap their ‘spot’, and regularly kneads you with their paws.

The socialisation period for felines is very brief. If a cat does not spend positive time with humans between the ages of two to seven/eight weeks, the cat may grow up to always be wary of people.

Most cats are born with hunting instincts, but this character far excels at stalking and capturing prey. Clasping toys in their teeth and frantically kicking can be strong signs of an expert hunter. Would suit a home with plenty of rural outdoor space to explore.

This type has to be nurtured into developing positive relationships with other felines, which can often go against their nature to see them as a threat to resources. The trick is to expose them to other cats and kittens when they’re young. Can be identified through their willingness to touch noses and rub up against other cats.

Sensitive to touch and their environment, they can be identified by their need for their own space to play and explore independently and a preference for regular but less ‘hands-on’ interactions with humans. They need to make the first move when it comes to being handled.

Their urge to investigate comes from a combination of DNA and exposure to new sights, smells and sounds from a young age. Will explore every box, handbag and lap that enters their domain.

So why is assessing a cat’s personality important? Not only can it help us understand our beloved pet cats better – which can only be a good thing – it can also make all the difference when it comes to finding the right home for the cats in rescue centres who are waiting to be adopted.

In fact, the purpose of Dr Finka’s fascinating research project, which was supported by International Cat Care and the Centre of Applied Pet Ethology, was to improve the rehoming process. By developing ways to assess human-sociability in cats, it’s possible to identify those who may find living in domestic environments with humans difficult. Charities such as Battersea Dogs & Cats Home work hard to find alternative homes for these cats – for example on working farms or stable-yards – where their relationship with humans is much more on their own terms.

Lindsey Quinlan, Head of Catteries at Battersea, said: “Offering rural homes to these cats means that they still have stability in their life without them having to change who they are as cats. All they need is shelter, food and water laid down for them. The cats still have the freedom to go around as they please and to be themselves.”

In 2016, Battersea’s Animal Partnerships team rehomed 110 cats to 33 outlets, including Albus, Chilli and Luna. Once nervous and under-socialised, they now reside at Greenway Stables in Godalming and have become sociable and affectionate cats who have opted to go into the home as well as in the stable, although Chilli, obviously a Cantankerous Cat type, chooses to spend most of his time out in the yard.