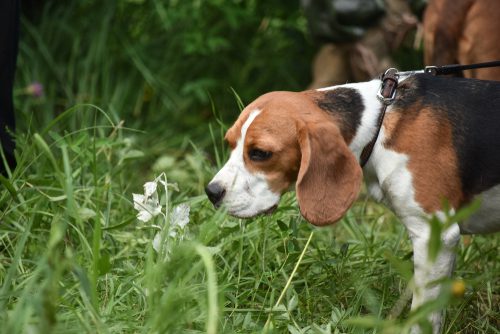 With busy lives, daily dog walks can sometimes be a bit of a route march, with no time for an olfactory detour. However, not letting your FBFF (furry best friend forever) stop for a sniff or two means the walk will most definitely lack the wow factor – for your dog at least. This is because smelling stuff is a really important part of being a dog.

Sniffing for dogs is an activity like no other. Quite simply, dogs are born to sniff – it’s how they interpret the world around them and doing it makes them feel good. Canine charity Dogs for Good, which trains assistance dogs to support adults and children with disabilities and autism, states: “Allowing a dog to sniff on a walk means it does take you longer, but the dog is taking in more information from the environment. Using their nose on familiar routes is also important, investigating who has passed through that area. All this information the dog is gathering could add to feelings of familiarity and security.”

Author of How Dogs Think: Understanding the Canine Mind, Dr Stanley Coren says: “Dogs are living in a totally different world than we are, filled with much, much more information than we can possibly process about smell.” He adds: “A dog relies on her sense of smell to interpret her world, in much the same way as people depend on their sight. Your dog interprets as much information as you do. However, she does much of this by smelling an object or animal, not by staring at it.”

Your dog’s nose has a pattern of ridges and dimples that, in combination with the outline of its nostril openings, make up a nose print that’s believed to be as individual and unique as a human fingerprint. In North America, some organisations even register nose prints as a way of identifying and helping to locate lost dogs.

And, of course, there’s the obligatory sniffing of all the ‘messages’ left by other dogs, which is baffling to us humans. Perhaps we should think of it as ‘pee-mail’. Dr Coren says information such as age, gender, mood and even health lingers long after the dog who left the message has gone: “The smell goes away for humans because it becomes less strong when it dries. Smell has to be carried to a human nose through moisture, but it sticks around for quite a long while for dogs.” Unsurprisingly, dogs like to refresh their personal signature, which is why they will stop to mark a favourite tree or lamppost.

An outlet for natural behaviour

As dogs see the world through their noses, canine experts recommend giving them more opportunities to sniff on walks and explore the world in a way that makes sense to them, providing valuable mental stimulation and an enriched, happier life. Dogs for Good states: “When a dog is on the scent of something it becomes totally engrossed in the activity. When teaching scent work you are not teaching a dog to use their nose but it is an outlet for their natural behaviour that leads to something rewarding. Dogs that may be showing undesirable behaviours are often very intelligent and have a higher drive to work than other pet dogs. Nose work can increase the dog’s focus and reduce reactivity and frustration.”

The charity advocates introducing scenting games and nose training because it:

Let your dog follow their nose with these scent games

The simplest way to introduce nose work and a quick way to improve recall and keep the dog focused on you:

This is a great family game as you need at least two people.

A good way to mentally and physically tire boisterous dogs who can be easily distracted. Teaching a release word such as ‘go find’ also puts the activity on cue and can help gain control over unwanted behaviour, providing a signal to the dog to focus as something exciting is about to happen.

Brush up on your dog park etiquette