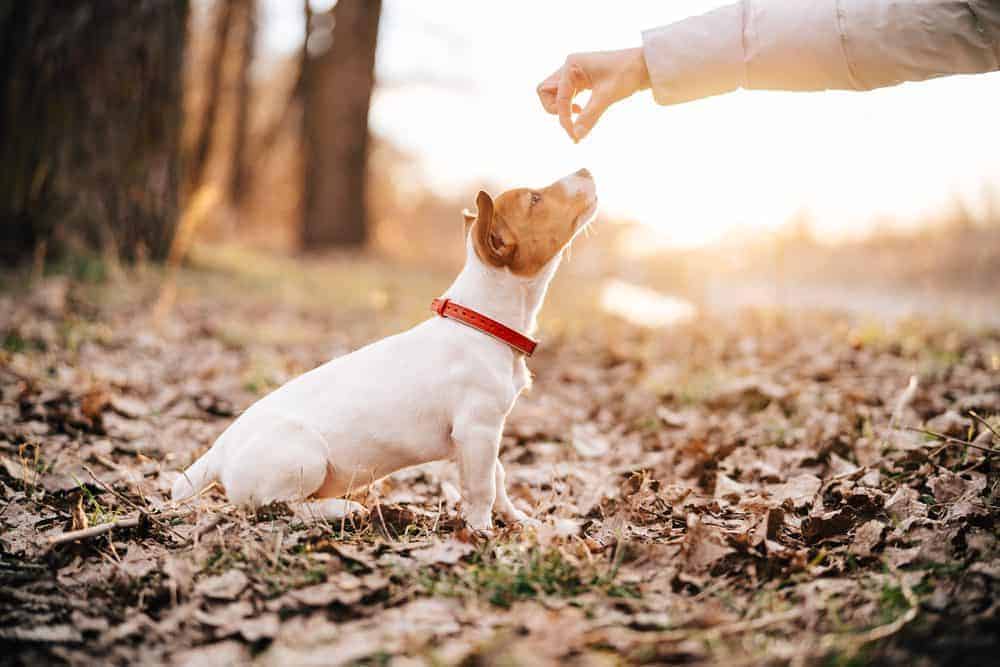 The value of reward-based training with your dog

Training your dog is an essential requirement. Without training, the world can seem a pretty confusing place for your canine companion. And, as we all expect dogs to know the rules and behave in a certain way – not jumping up, coming when they’re called and so on – it’s vital that your dog learns to trust you and understands what’s required of him. And of course, it’s easier for both human and canine to learn important stuff when it’s a fun experience, which is where ‘reward-based training’, also known as ‘positive reinforcement’ comes in.

Reward-based training is advocated by today’s top canine experts, who have thrown out the unkind and old-fashioned idea that dog training should be based around punishment or asserting dominance over a dog. Research reveals that dogs trained using positive reinforcement, which focuses on what they can do, rather than what they can’t, do better at learning a new task. When you think about it, it’s pretty obvious that if you reward your dog with something he wants as soon as he does what you ask, he is far more likely to do it again. What’s more, successful problem-solving, such as learning a behaviour in exchange for a reward, makes dogs happy.

Dogs Trust states: “Research has shown that using reward-based methods are effective, and less likely to be associated with problem behaviours. This approach also means that dogs have better welfare, enjoy their training and form a better bond with owners.”

Set up to succeed

It’s a sentiment echoed by the RSPCA: “The RSPCA supports reward-based training methods whereby the dog is set up to succeed and then rewarded for performing the ‘good’ behaviour (positive reinforcement).”

Rewards may be in the form of a food treat, favourite chew toy, or verbal praise when the dog performs the ‘good’ behaviour. Reward-based training also involves generally ignoring any ‘unwanted’ behaviours. If dogs are not rewarded – receiving no attention or treats – for a certain behaviour, they tend to stop doing it.

To help you and your canine pal along the road to success with reward-based training, pet charity PDSA has compiled a handy list.

Know what makes your dog tick! The reward has to be something that your dog really likes, so that they’re prepared to work for it. Some dogs like food treats, others prefer praise or a favourite toy.

Keep it short. Don’t make training sessions too long, or your dog will lose interest or get frustrated. Always end on a high, after a success.

One by one. Focus on training one command at a time. When your dog has learnt one, then you can move on to the next.

Clear commands. Use short commands. Avoid confusion by only using the command for the behaviour you want.

Keep going. Keep rewarding when your dog does what you want. It may take lots of repetition but, with patience, your dog will eventually understand the command and what you want.

Ignore mistakes. Every dog makes mistakes sometimes. It’s not their fault – it just means they haven’t learnt the task yet. Ignore the mistake and give the reward next time they get it right.

Never use punishment. Shouting, smacking, using gadgets such as water pistols, rattle cans or choke chains are all forms of punishment. They cause anxiety and fear; which are proven to make animals learn slower. It’s unkind and teaches your dog that people can’t be trusted, leading to behavioural problems later in life.

Get everyone on board. Everyone in contact with your dog should praise the right behaviour, use the same commands and ignore mistakes, so your dog gets the same message from everyone, rather than getting confused by different messages.

Get them to eat the right treats. Dog obesity causes health problems. On training days where you’re using treats, give them a smaller main meal.

CHOOSE A TRAINING CLASS WITH CARE

Dogs young and old, as well as their humans, can all benefit from training, but if you’re looking to sign up to a class, make sure they use reward-based techniques. Avoid any trainers who advocate the use of water pistols, rattle cans or similar training gadgets, or who base their training on the idea that dogs need to be dominated. Members of the Association of Pet Dog Trainers only use reward-based methods – visit their website to find a trainer in your area.

Dogs Trust has an advice-packed leaflet ‘How to have a well-behaved dog’ using reward-based training, which you can download here >>

FIND OUT MORE about the value of praising your dog here