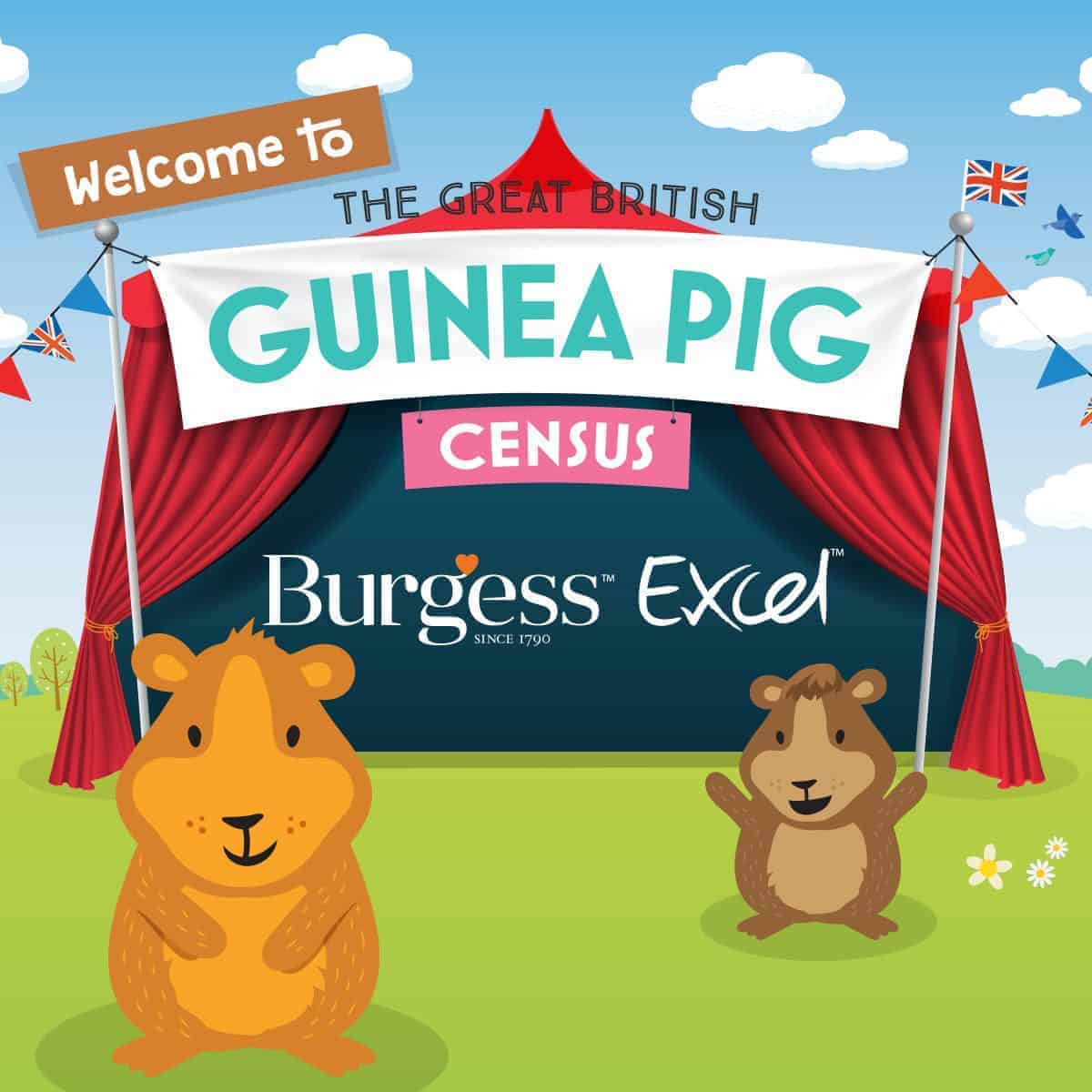 The truth about the UK’s guinea pigs

Guinea pigs have been one of the UK’s most popular pets for decades. In fact, the Pet Food Manufacturer’s Association places them at number six in the top 10 pets’ chart, with an estimated 400,000 of these chatty cavies currently residing here. However, despite their popularity – they’re gentle, sociable and incredibly cute, what’s not to love? – providing pet guinea pigs with everything they need to live happy, healthy and fulfilling lives is not as straightforward as you might think.

Burgess in-house vet, Dr Suzanne Moyes, says: “We wanted to conduct a survey to see how much owners know about caring for their guinea pigs. They’re classed as exotic pets and are actually more difficult to look after properly than dogs or cats. That’s why, even though they make great companions for children, it’s essential that an adult is primarily responsible for their care.”

The good news is that, according to the findings of our Great British Guinea Pig Census, most owners are aware of the five welfare needs – diet, company, health, environment and behaviour – that need to be met to enable pet piggies to be happy and healthy.

Along with their specially formulated guinea pig nuggets and handful of fresh greens, guineas need lots of high quality long-stem feeding hay in their diet to gnaw on to keep their digestion in good shape and prevent their ever-growing teeth from getting too long and painful. Our survey revealed that:

Guinea pigs are highly social animals who like to live in pairs or small groups. The only exception is if you adopt a lone piggy who may struggle to bond with a new companion and may prefer to live alone. We discovered that 46% of those surveyed have a pair of piggies and 52% have more than two. Our survey also revealed that 45% of owners have rescue guinea pigs.

What’s more, 74% of those with one guinea pig stated that they would have another one. However, if you are introducing guineas to each other for the first time this needs to be done slowly, following your vet’s and rescue organisation’s advice. Pet charity PDSA has some helpful tips. If you are keeping a mixed sex pair or group, get the males neutered to avoid unwanted litters.

An important part pet guinea pigs’ lives is the special bond they develop with their human owners. Our survey showed that:

In the wild, guinea pigs live in close family groups of five to 10 individuals. Several groups may live in close proximity, forming a colony. That’s why pet guinea pigs should have the company of at least one other piggy pal – same sex littermates are a good pairing.

Unlike dogs, cats, rabbits and ferrets, guinea pigs don’t require yearly vaccinations. This means that many are never taken to the vets for regular check-ups. Our survey revealed that just 17% of owners take their pets to the vet once a year, with a third – 33% – visiting their vet less than once a year

Dr Suzanna Moyes advises: “Always keep a close eye on your guinea pigs so you are aware of any changes to their eating habits or behaviour. Getting into the habit of carrying out regular checks will help you spot any worrying changes early.” We’ve a useful guide to regular health checks here >>

Vet bills for small exotic pets can stack up, but our survey revealed that only 3% of owners have their guinea pig insured.

In Switzerland, an animal rights law was introduced in 2008 making it illegal to own just one guinea pig at a time as it was considered an act of cruelty to deny these animals the chance to have a companion of their own species.

Guinea pigs are active for up to 20 hours a day and sleep only for short periods, so they need plenty of space to exercise. A good quality hutch should be draught-free, predator proof and, along with plenty of bedding hay, provide a cosy place to sleep. Traditional small hutches do not provide the space guinea pigs need to behave normally. A hutch should just be viewed as your guinea pigs’ ‘bedroom’ and be permanently attached to a much larger run. Also provide lots of safe hiding places – such as pipes, tunnels, deep piles of hay and guinea pig nest boxes – where they can escape if they feel afraid. Guineas don’t like cold weather, so in winter, move their accommodation somewhere warmer, such as into a shed, porch or utility room. According to our survey:

Guinea pigs should never be kept with rabbits as they are two completely different species with different housing and nutritional requirements. Bullying between species can occur and rabbits can give guinea pigs serious diseases.

How do you know if you have happy guinea pigs? These little rodents communicate how they’re feeling using several noises, including the ‘wheek-wheek’ call – a sign of excitement or to find a friend – and a low ‘purring’ sound, which they make when they are feeling content. They also emit a series of short ‘putt-putt’ noises when they’re happily exploring stuff. When really excited, guineas can jump straight up and down, often turning 90° in mid-air, performing a neat little move known as ‘pop corning’. The words most used by owners surveyed to describe their piggies were: playful (32%), cuddly (17%) and boisterous (17%). We also discovered that:

Dr Suzanne Moyes adds: “We’d like to thank everyone who took part in our first Great British Guinea Pig Census, which has provided some fascinating insights. It’s great to see that there are so many passionate, well-informed owners who love their piggies. At Burgess, we’ll continue with our commitment to sharing our expert knowledge of caring for these wonderful little animals to give them the happy and healthy lives they deserve.”

Healthcare advice for guinea pigs
They might be small and gentle but, as any vet will tell you, guinea pigs need a big helping of love and care when it comes to managing their health. Our in-house vet Dr Suzanne Moyes, explains more...

Our 7-point guide to being a gold-star guinea pig owner
Today, we are better informed about how to care for these friendly little creatures, so that we can provide them with everything they need to enjoy happy and fulfilling lives.

Take a closer look at your guinea pigs' diet
Wild guinea pigs naturally eat a diet of grasses, plants, vegetables and crops. As exotic pets, piggies require a specialist diet to meet all their nutritional requirements. Our in-house vet Dr Suzanne Moyes is on hand with expert advice.

12 fun facts about gorgeous guinea pigs
How much do you know about these highly social, scent-marking, mid-air spinning small furries?

Bonding with your small pets
Hand-feeding is a great way to build a closer bond with small animals. It takes time to build trust, but when your little friend finally feels confident enough to take a treat from your hand, it’s a special moment. Our in-house vet Dr Suzanne Moyes has some tips...